PRO Login
You are reading
This is the heading of proper length
Up
PRO Login
Main page Tutorials, Altcoins, Ethereum, Cryptocurrency
Hot topic

Ethereum Classic: What is It and How to Buy It?

Does the word Ethereum ring any bells with you? Of course you must have heard about it over the past year and you also probably know that it is the second most valuable cryptocurrency in the world after Bitcoin. Now what about the Ethereum Classic? It is also currently in the top biggest altcoins according to its market cap, and it is different from Ethereum. With the help of this guide, you will be able to differentiate between the two coins and learn how to buy the Ethereum classic.

In the first half of 2016, a project known as the DAO (Decentralized Autonomous Organization) attempted to create a decentralized corporation over the Ethereum network.

The DAO organized an ICO (Initial Coin Offering) and collected over $140 million in ether, which ultimately became the biggest crowdfund in history, after which the collected funds were entered into a smart contract.

Soon after, the hacker used the bug in the contract’s code, which let him withdraw the DAO funds into another of his contracts. This shocked many members of the Ethereum (TICKER: ETH/USD.CRC) development team, who were also part of the DAO project.

Ethereum was much smaller back then. The network, created by Vitalik Buterin, was about a year-old and the DAO had about 14% of all the cryptocurrency, and the price of ether was declining. The situation was saved by the peculiarities of the DAO contract, as the hacker could start draining out the funds only in a month.

It was proposed to drop the entire Ethereum blockchain to the pre-attack point and change the entries so that the DAO investors could cancel their investments and regain their ethers. In other words it was suggested to rewrite the history, which is impossible in the decentralized immutable ledger.

To many the idea did not seem to be as good, so the Ethereum Classic came to existence.

This is how it was explained. The unique feature of Ethereum is based on its absolute code execution; the code is the law, and everything that you program will never be stopped running. True, the system does not take into account the quality of the code and does not know your intentions, it simply executes the program.

The mere fact that the Ethereum team was able to resolve the DAO problem became a red flag for many. The question rose that if some phone calls between the key network members and a piece of code can lead to a change in the blockchain, how can you be sure that this will not happen again and again?

Thus, the supporters of Ethereum Classic consider themselves to be the successors of the original Ethereum network, because they use the same code and do not recognize the rollback of the block. And, given the hundreds of millions of dollars of capitalization, it seems that their position is convincing to many.

During the split, it was unclear what would happen next, and the cost of both ETH (Ethereum) and ETC (Ethereum Classic) fluctuated greatly, followed by the annual trend in the price reduction of the cryptocurrency. However, since then the trend has changed, and both currencies are rapidly becoming more expensive.

How to buy Ethereum Classic

Get a Coinomi wallet, a multi-coin and multi-asset HD wallet. Coinomi runs on Android, and will soon be released for iOS operating system.

Another way is to install a Chrome extension into your browser from the ClassicEtherWallet CX, which allows you to easily and conveniently store ETC without having to use a web wallet, since the extension acts as a local wallet.

However, the most secure way to store ETC is in a hardware wallet, such as Ledger Nano S, which is convenient for offline storage of your tokens. 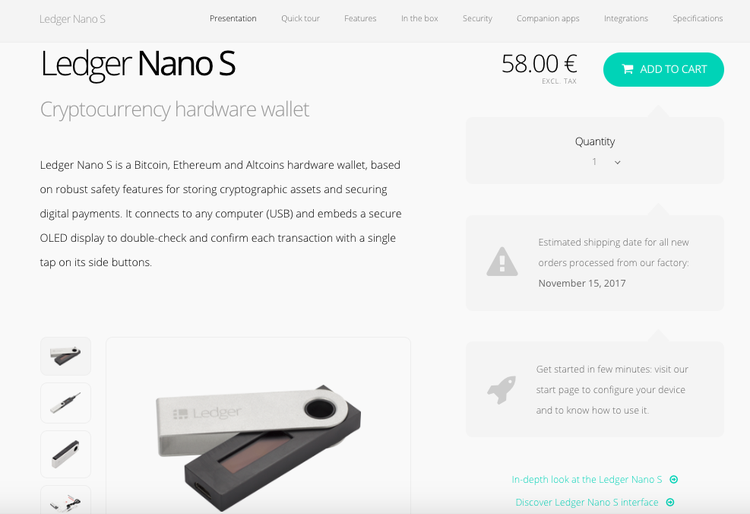 There is as well a Mist wallet, a native software of the Ethereum network, adapted to work with the Ethereum Classic.

You should know about the three major exchanges for ETC: Poloniex, Bitfinex and Kraken. The latter two let you to buy ETC with fiat currencies and bitcoins (Bitcoin), and in Poloniex it is just with the bitcoins. Let’s take a look at the the buying process on the example of the Poloniex exchange:

In case the price you entered is higher than the market price, the deal will be fairly quick. If lower, you will be added to the book of orders, and as soon as someone agrees to sell at your price, the order will be executed.

Soon after the purchase, remember to get your coins out of the exchange, since it is important to keep control of your money and reduce the trust you put in exchanges.

To get a receiving address you should return to the wallet you’ve previously chosen. Keep in mind all the security measures such as backing up the wallet.

Once you get the ETC address return to Poloniex. At the “Deposit & Withdrawal” tab look for the ETC line and click on “Withdrawal”.

Enter the new address you got, choose the amount, which in case you are not actively trading, should be the entire amount and click on “Withdrawal”. Be aware that the exchange has limits on a daily and monthly withdrawal of funds, and to increase them you need a confirmation of your identity.