PRO Login
You are reading
This is the heading of proper length
Up
PRO Login
Main page News, Tech, Aviation

Space mining not as unrealistic as you think: Goldman Sachs

Mining a moving asteroid in space is the stuff of science-fiction but the idea just became a little more real with Goldman Sachs telling clients "space mining could be more realistic than perceived".

In a 98-page note analyst Noah Poponak and his team argue that the decreasing cost of rocket launches, thanks to reusable rockets pioneered by Space X, and better technology could make space mining feasible in the not too distant future.

"Prospecting probes can likely be built for tens of millions of dollars each and Caltech has suggested an asteroid-grabbing spacecraft could cost $2.6bn." 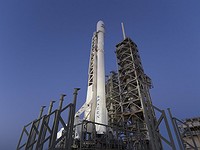 The note adds that precious commodities such as platinum are abundant on some asteroids.

"A single asteroid the size of a football field could contain $25bn- $50bn worth of platinum," it says.

But the note also comes with a warning.

"Successful asteroid mining would likely crater the global price of platinum, with a single 500-meter-wide asteroid containing nearly 175X the global output, according to MIT’s Mission 2016," the document states.

Goldman adds that raising the capital necessary for a space mining venture would not be out of reach for many resources companies, which routinely spend tens of billions of dollars on large projects.