WikiLeaks has released new documents which allegedly reveal the hacking tools that the CIA has used for almost a decade to infect Apple Inc. (NASDAQ: Apple [AAPL]) products such as iPhones and Macs.

At a press conference yesterday the group's founder Julian Assange said ominously entitled "Dark Matter" and "Sonic Screwdriver" software were difficult to detect and could remain on a Mac even after its hard drive had been erased.

The group also suggested that the CIA may have compromised Apple's supply chain and described a tool named "NighSkies", which it said was "was "expressly designed to be physically installed onto factory fresh iPhones. i.e the CIA has been infecting the iPhone supply chain of its targets since at least 2008".

"While CIA assets are sometimes used to physically infect systems in the custody of a target it is likely that many CIA physical access attacks have infected the targeted organization's supply chain including by interdicting mail orders and other shipments (opening, infecting, and resending) leaving the United States or otherwise," WikiLeaks said in a statement.

Wikileaks added that NighSkies allowed for "full remote command and control" of iPhones and access to files, text messages, call logs and contacts.

However, a number of hacker have said the WikiLeaks' release described tools that were already well-known and offered no new information.

Dino Dai Zovi, who is chief technology officer of software-security vendor Capsule8 Inc. and known hacker of Apple devices told The Wall Street Journal there were "no surprises" in the documents.

He said that Apple had already addressed a number of vulnerabilities after some of the techniques described were publicised in 2012. 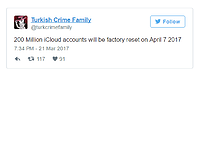 Apple also said that it had fixed all vulnerabilities in Macs launched after 2013, and that the alleged iPhone vulnerability only affected the 3G model and was fixed with the release of the iPhone 3GS in 2009.

"The technology built into today's iPhone represents the best data security available to consumers, and we're constantly working to keep it that way," an Apple spokesperson said.

"Our products and software are designed to quickly get security updates into the hands of our customers, with nearly 80 percent of users running the latest version of our operating system.

"While our initial analysis indicates that many of the issues leaked today were already patched in the latest iOS, we will continue work to rapidly address any identified vulnerabilities."