Donald Trump has arrived at the peak of US politics by winning the White House, but his personal fortune has gone in the opposite direction.

The president's net worth has plunged by $1 billion since last year, according to Forbes 2017 global rich list.

His wealth of $3.5 billion takes him down to 544th place in the rankings, 220 places lower than last year.

Forbes put the decline in Mr Trump's wealth down to the slump in Manhattan's real estate market, where a large portion of the president's assets are located. 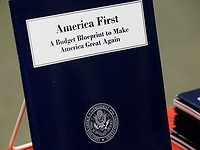 "Forty percent of Donald Trump's fortune is tied up in Trump Tower and eight buildings within one mile of it," Forbes said. "Lately, the neighborhood has been struggling (relatively speaking)."

Mr Trump's wealth has been the subject of ongoing debate since he made his bid for the presidency.

It is expected to come under renewed scrutiny after yesterday's revelation by FBI Director James Comey that the bureau is investigating any links between the Trump campaign and Russia, which the FBI accuses of meddling in the US presidential election.

Mr Trump has defied tradition by continually refusing to disclose his tax returns, which analysts say could shed some light on any business links the president may have with Russia.