President-elect has publicly criticized Boeing for spending $4 billion on replacing the aging planes used for transporting U.S. presidents while the White House claimed that Trump's statement had no grounds.

Donald Trump has posted yet another provocative tweet, this time about Boeing (LSE: BAE Systems [BA]). It is no news that the president-elect likes using his Twitter account with almost 17 million followers for making political statements more than any other American President before. Yesterday morning, Trump attracted everyone's attention to the largest American aircraft manufacturer Boeing, which he criticized for unwise use of funds:

Boeing is building a brand new 747 Air Force One for future presidents, but costs are out of control, more than $4 billion. Cancel order!

What the president-elect referred to in his tweet is Boeing's current project of replacing the aging presidential jets that few people knew about before Trump's tweet. At the moment, the company is negotiating the amount of the final order for the planes that have been in use for almost three decades and need to come in service by 2024. That was exactly what Trump referred to as jets for "future presidents". Reuters adds that Boeing has not received any funds for constructing the planes so far, so it was not clear what prompted Trump's reaction.

Later yesterday, the president-elect surprised the reporters with an unplanned appearance in his Trump Tower residence, where he elaborated on his comment about Boeing by saying that the project was "totally out of control".

"I think it's ridiculous. I think is doing a little bit of a number. We want Boeing to make a lot of money, but not that much money,” Trump told the reporters.

Unsurprisingly, Trump's surprise statement, though still unconfirmed at the time, distressed Boeing's investors. Shortly after the tweet was out, BA shares dipped about 1.6%. However, in the next hours the stock managed to recover to the previous levels and even grow slightly higher after noon. 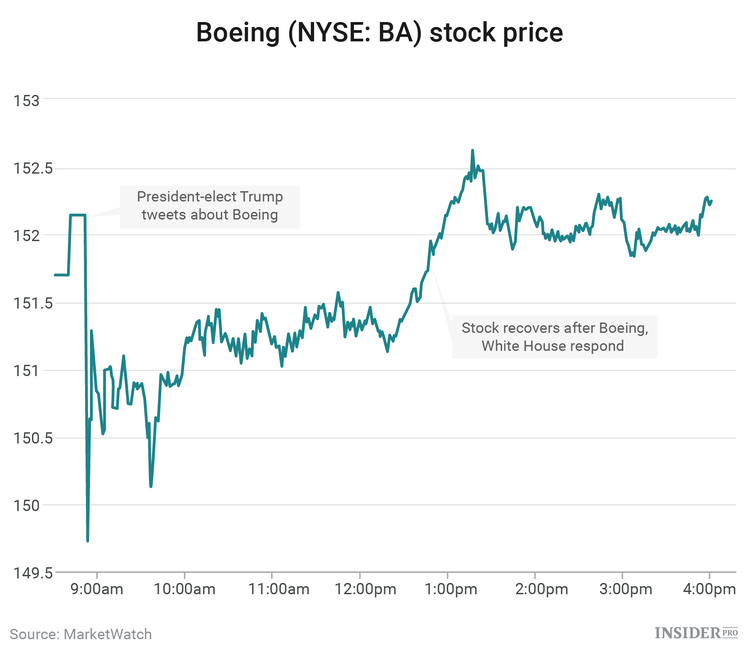 The reason for such a quick stock recovery is an almost immediate response to Trump's tweet from Boeing and the White House with opposing statements suggesting that the numbers Trump quoted were created from thin air, reported MarketWatch. Boeing responded by an official statement mentioning some quite different amounts:

“We are currently under contract for $170 million to determine the capabilities of these complex military aircraft that serve the unique requirements of the President of the United States. We look forward to working with the U.S. Air Force on subsequent phases of the program allowing us to deliver the best planes for the President at the best value for the American taxpayer,” the company said in a statement.

Not long after that, the White House's press secretary Josh Earnest made a statement:

This was an interesting reaction from the White House because the numbers mentioned by the president-elect were expected to match those presented by the administration. However, these statements were enough to lift Boeing's stock up again, as investors shrug off the uncertainty. Some experts add that Trump's comment about Boeing comes after the company's CEO, Dennis Muilenburg, spoke negatively about Trump's stance on foreign policies, especially those related to international trade.

Boeing chief argued on last week's Illinois Manufacturers Association that strong international trade is absolutely essential to the American economy and mentioned that today a large portion of Boeing's business was coming from partners outside the United States. He said that every third Boeing 737 the company delivered this year was going to China, which was not the case just a few years ago. Muilenburg also indirectly criticized the general "antiglobalization sentiment" of Trump's presidential campaign, reports the Chicago Tribune.

In addition to that, TIME's Zeke Miller said that Trump's comment on Boeing is a "time-honored ploy to demonstrate a desire to cut costs in the bloated Defense Department" and present himself in a good light to support his public image in the eyes of voters. As the planes in question are dedicated to transporting American presidents, Trump could use his statement as a PR trick to position himself as someone ready to sacrifice personal comfort and luxury to cut unnecessary costs, adds CNBC.

Anyway, Trump's tweet did have an effect on Boeing's stock, though it has managed to shake off the pressure. The discrepancy between the numbers mentioned by the president-elect, the White House and Boeing raises questions about the credibility of Trump's Twitter announcements, but, according to Trump himself, that is all media's fault.

If the press would cover me accurately & honorably, I would have far less reason to "tweet." Sadly, I don't know if that will ever happen!