The world's biggest oil cartel has surprised the stock market yesterday with a long-awaited agreement on curtailing oil production that sent shock waves through the oil market.

The investors were genuinely surprised that the oil cartel managed to put the political issues behind them in Vienna and present the market with a solution. Oil prices and energy stocks immediately reacted to the positive news and led the U.S. stock market higher in yesterday's trading. Brent (NYMEX: XBR/USD) and WTI crude (NYMEX: XTI/USD) impressed investors with a strong growth as they reached their highest levels in a long time at the close yesterday.

According to the Guardian, Brent crude is currently hovering at the 6-week highs around $52.50, 1.2% up today and 12% higher since yesterday morning. WTI crude smashed $50 for the first time in a month earlier this morning and showed a nearly 10% gain. Both Brent and U.S. crude had the biggest one-day move since February, says Reuters.

When it comes to the energy stocks, they also had their best day in months or even years. MarketWatch experts say that among all 36 stock in the S&P 500 energy benchmark (SNC: SPX), at least 16 gained 10% or more yesterday. 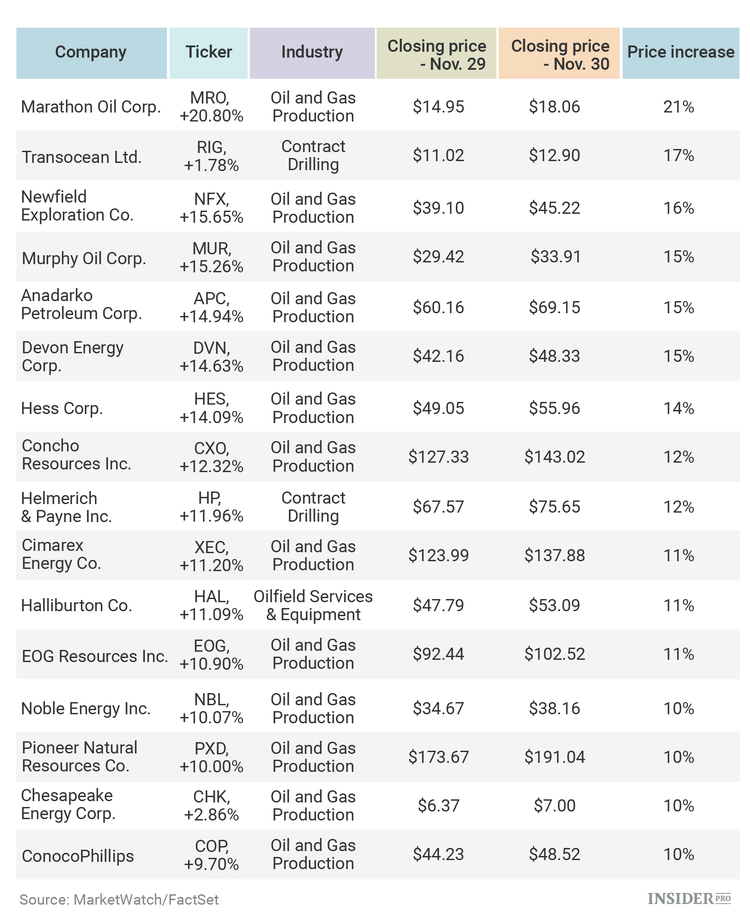 At this point, it was clear that the energy sector was celebrating the deal with a strong bullish reaction.

"For all E&P stocks, this is a bullish call for sure, because price is directly correlated with cash flow," an analyst Luana Siegfried told CNBC.

And this is not the limit, say the experts. If OPEC doesn't give the market any hint of uncertainty around the agreement, the oil stocks and oil prices could rise even higher. An analyst Raymond James told CNBC that he expects U.S. crude to grow up to $60 per barrel until the year-end. MarketWatch also cites another analyst, Phil Flynn, claiming that the market should see the oil heading back to the levels of $60 per barrel in the near future, in case the production cuts are higher than 1.1 million barrels per day.

However, it might still be a little too early to celebrate. Reuters adds that the sharp gains in the oil prices might be limited by the growing skepticism around the dedication of individual OPEC countries to comply with the plan.

"It's going to take time to see who's going to abide by those rules," an expert Oliver Sloup told Reuters.

This uncertainty comes from the history of some individual producers neglecting the group's agreements. Therefore, although the agreement was officially announced by the OPEC President yesterday, some uncertainty around this difficult decision still lingers. Bloomberg adds that Saudi Arabia, the United Arab Emirates and Kuwait have been traditionally compliant with the supply cuts unlike some other cartel members, especially when the prices are on the low side.

On top of that, the Financial Times mentions that such members as Venezuela and Angola, both struggling and very oil-dependent countries, have a "patchy" record of complying with the agreements. And, considering their difficult economic situations at the moment, they might need an ongoing reminder to do their part of their deal. Similarly, Russia has been sending mixed signals regarding its participation in the production cuts in the last months. In this situation, even a slightest doubt could drag the oil prices down again.

Anyway, the gains that the positive OPEC decision brought in the pockets of the energy companies have been more than they could wish for. For example, Continental Resources (NYSE: CLR), an oil & gas company of Harold Hamm, the richest American energy billionaire and an energy adviser of Donald Trump, made another $3 billion for Hamm by jumping over 23% yesterday.