PRO Login
You are reading
This is the heading of proper length
Up
PRO Login
Main page Economics, Donald Trump

Donald Trump has unveiled his first budget outline with the centrepiece being a massive $54 billion increase in military spending and billions of dollars for the border wall he insisted Mexico would pay for.

The $1.1 trillion budget was described by Trump's director of the Office of Management and Budget, Mick Mulvaney as a "hard power budget" that will prioritise defence spending over the "soft power" measures of diplomacy and foreign aid.

The increase in defence is the largest since President Ronald Regan occupied the White House in the 1980s and is just short of the UK's entire defence budget, which is the fifth largest in the world at $55 billion.

"A budget that puts America first must make the safety of our people its number one priority — because without safety, there can be no prosperity," Trump said in a letter accompanying the budget. "The core of my first budget blueprint is the rebuilding of our nation's military without adding to our federal deficit."

The increase in military spending will be financed by $54 billion of cuts to non-defence spending at the State Department, the Department of Housing and Urban Development and the Environmental Protection Agency, while some federal programs will be scrapped entirely. In total twelve of 15 Cabinet agencies will see their budgets cut.

One of the biggest losers is the EPA with the budget proposing eliminating funding for climate change research and programs.

More than 3000 EPA workers will reportedly lose their jobs as a result of the cuts.

Mr Mulvaney said the "core functions" of the EPA could still be achieve but John O'Grady, who heads the union that represents EPA employees disagrees.

"The US EPA is already on a starvation diet, with a bare-bones budget and staffing level. The administration's proposed budget will be akin to taking away the agency's bread and water," he said.

"How can this administration tell America that we will have clean air and clean water with a 25 percent reduction in US EPA's budget?" 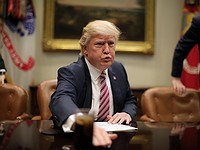 The Department of Housing and Urban Development will also take a hit from the budget to the tune of $6.2 billion while the National Institutes of Health will lose $5.8 billion.

However, there is money in the budget for the president's much touted border wall with Mexico.

An immediate $1.5 billion has been allocated, with another $2.6 billion planned for the 2018 budget year.

But despite the large investment Mr Mulvaney could not say how much the wall would cost and how far it will span.

The $1.1 trillion budget outline is a preview of the full budget, which totals around $4 trillion and will be handed down in May.

It should also be noted that the budget requires Congressional approval, making changes inevitable.

The so-called budget blueprint does not include taxes, Social Security, Medicare and Medicaid.