PRO Login
You are reading
This is the heading of proper length
Up
PRO Login
Main page Analytics, Donald Trump, US, US Elections 2016

Donald Trump earned $150 million in 2005 and paid $38 million in taxes, the White House has confirmed after two pages of the president's tax returns were leaked.

The highly-coveted documents turned up in the mailbox of Pulitzer prize-winning investigative reporter David Cay Johnston, who published the excerpts on his website DC Report ahead of an interview on MSNBC.

The form also reveals that Trump claimed a $103 million writedown that year. 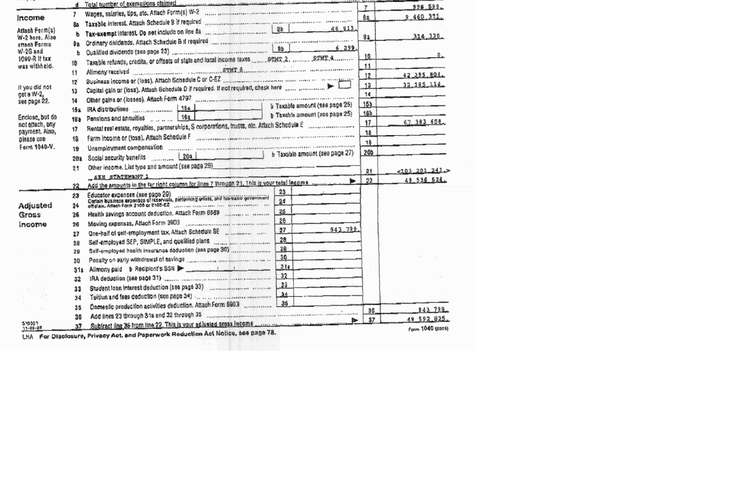 Ahead of the release of the tax return MSNBC host Rachel Maddow tweeted that she had the documents and would reveal them on her program, prompting the White House to issue a statement confirming the documents were real and also lashing the network.

"You know you are desperate for ratings when you are willing to violate the law to push a story about two pages of tax returns from over a decade ago," the statement said.

"Before being elected president, Mr. Trump was one of the most successful businessmen in the world, with a responsibility to his company, his family and his employees to pay no more tax than legally required."

The statement added that as well as paying income tax the president paid "tens of millions of dollars in other taxes, such as sales and excise taxes and employment taxes, and this illegally published return proves just that." 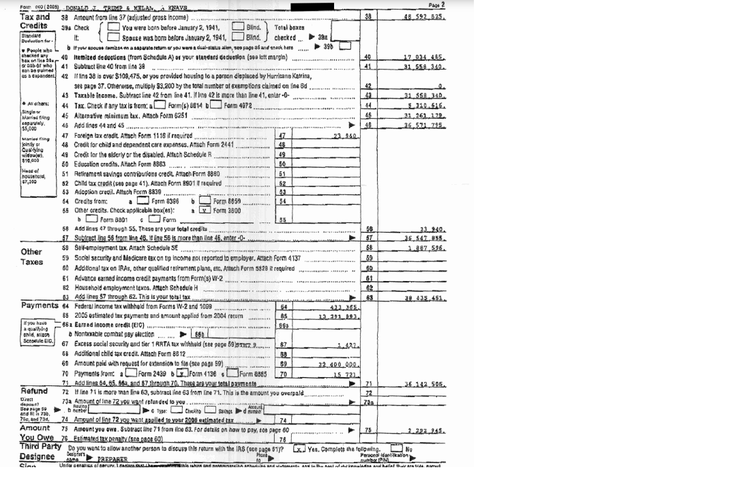 While the documents shed some light on Trump's finances Johnston said many questions remain unanswered.

"You want to see the sources of income which will be shown in his business returns — he has over 500 business entities," he told MSNBC.

"You want to know who the partners are in those entities and what they show about the income.

"You also, by the way, want to show the interest he's paying and the fees he's paying to other people, to know who he's paying."

Johnston said Trump's tax rate for 2005 year was just 24 percent, which he compared to the rate that would be paid by an upper-middle-class married couple like himself and his wife.

He said if Trump's proposal to abolish the alternative minimum tax had been in place "he would have paid taxes at a lower rate than the bottom half of taxpayers, the poor in this country who make less than $33,000".

"$153 million of income, he would have paid a little over $5 million. Less than three and a half percent," he said.

The journalist also suggested that Trump could have leaked the documents himself, saying that the businessman has a history of using leaks.

Trump's tax returns have been the subject of ongoing interest since he announced his bid for the presidency in 2015.

Unlike all other presidential nominees going back decades Trump has refused to release his tax returns, saying that he was prohibited from doing so because he was being audited by the Internal Revenue Service (IRS).

However, experts argue that an IRS audit does prohibit bar someone from releasing their tax returns.

Last year in the late stages of the presidential campaign The New York Times revealed that Trump had declared a $916 million loss on his 1995 tax return.

The loss would have allowed Mr Trump to cancel out the equivalent amount of taxable income over an 18-year period, experts said.

The revelation was used by Trump critics to attack his performance as a businessman but his supporters, including former New York Mayor Rudy Giulliani said the writedown showed his business "genius".